To start our thinking about wood we invited three of the Art School’s expert practitioners – Gerry Alabone, David MacDiarmid and Dick Onians – to engage in a conversation facilitated by Principal Tamiko O’Brien. The following is an edited transcript of their discussion.

DAVID MACDIARMID : The wooden object that I brought in is something that I made for an exhibition last year. It’s created from three pieces of beech and one piece of oak that have been joined and then turned. I am interested in the relationship between science and geometry and hand - skills. I was thinking about sound waves at the time, and peaks and troughs of the waves, and then translating them into form. It also relates to my research into ‘atomic’ era design motifs.

GERRY ALABONE : It’s a lovely thing. When I first saw it I was reminded of ‘Continuous Profile’ at the Imperial War Museum, where Mussolini’s profile was used to form an object expressive of dynamism and futurist ideology. But this is a much more complex shape; it’s made of two different types of timber but it is turned quite seamlessly, that is some very slender turning and lots of different shapes and asymmetry. I brought in an old object, something I found. This is lime, and laminated like yours, but then carved. A little cherub’s head with two wings, the tip of one wing has been lost. I found it when clearing a frame maker’s workshop a few years ago. It has been gilded, but the gilding has suffered badly from misuse. The carving betrays the wood’s character and you can still see the marks of the chisel and the undercutting at the back. Wood that is well looked after can stay in pristine condition, and obviously waterlogged wood survives through millennia. It is often the surface which suffers more than the material itself. 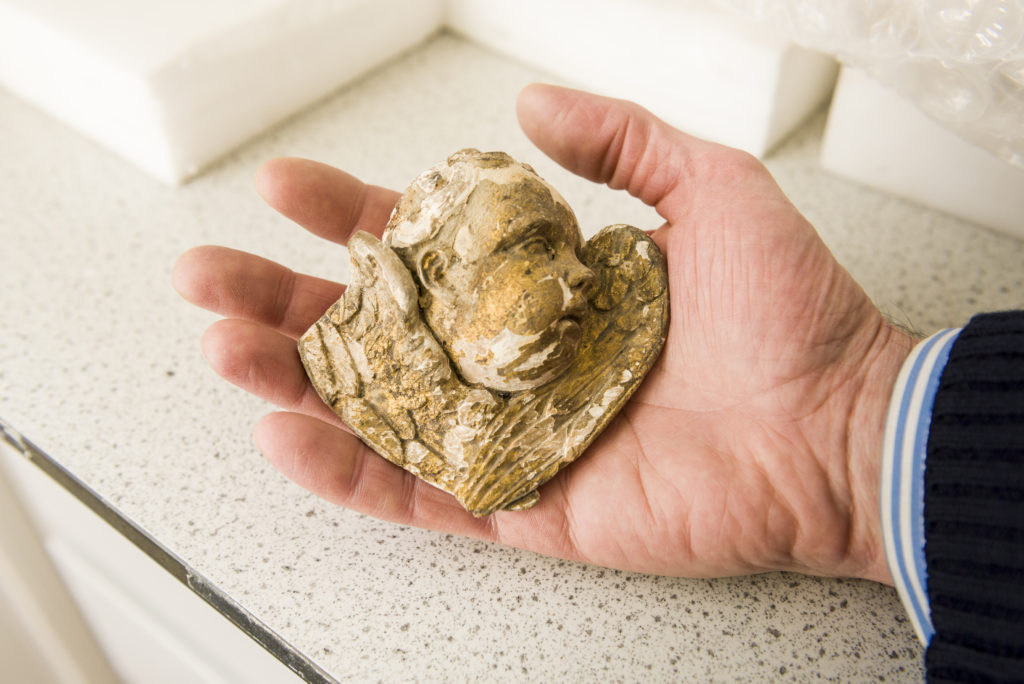 DICK ONIANS : I have an image of one of my sculptures – a horizontal Moebius which is a visual pun on infinity. It is carved in walnut. A resin cast was chosen for their collection by the Newton Institute for Mathematical Sciences in Cambridge. This is one of my pieces on the theme of endlessness and regeneration. The walnut wood has qualities which confer strength even on the short grained ends and the figure is quiet enough not to interrupt the flow. 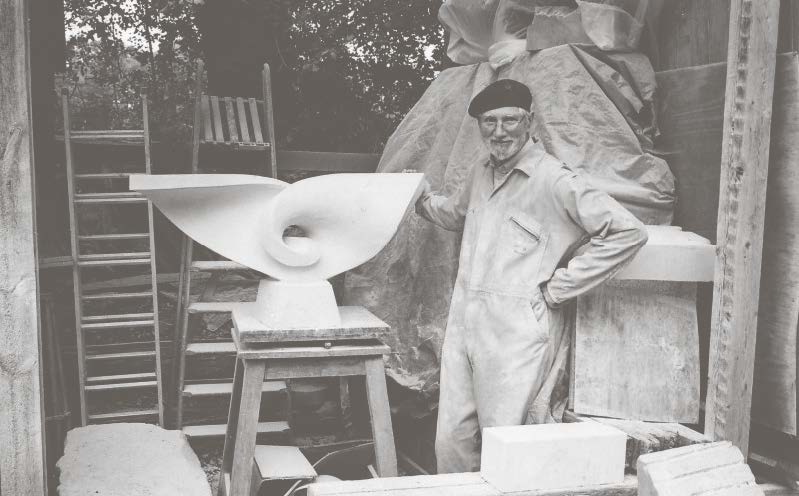 GERRY ALABONE : Looking at the objects we have here, they all show beautifully the capabilities of wood, and why it is such a versatile material that can be so meaningful to us in so many ways.

DAVID MACDIARMID : Wood is an umbrella term for such a range of materials – it covers everything from load bearing beams, to paper making ; you have craft, art and the longevity of making throughout history and cultures as well. I like the inter- linkages when thinking about one material. For example : the Wright Brothers’ first plane was made of canvas and wooden structures, which are similar to
a canvas and stretcher used for a painting.

GERRY ALABONE : That’s interesting – one thing that struck me on a visit to a restoration project in Brighton recently was how the houses were built by people who knew the properties of their timber so well that they could build supports going right up through a late - 18th or early - 18th century house. But now pine isn’t beautifully slow grown, as it was a few hundred years ago. New pine timber simply would not be strong enough; it isn’t capable of withstanding the same load. So therefore it’s against building regulations to replace pine with pine – it’s actually illegal to restore and conserve those buildings using the same material !

DICK ONIANS : As supplies of traditional timber for construction have dwindled such timber is now stress graded. Wood for special uses such as for sports goods, musical instruments and boats is selected by experienced users and where suitable supplies have dried up, timbers discovered by the destruction of the rain forests are used as substitutes. Advances in adhesives have made laminated timber more feasible. Chemically bulked or altered timber is now used in many fields including conservation. This is how the industry has found alternatives to the slow growing techniques of former times – the expert knowledge once required of the forester is being substituted with the expertise of the chemist.